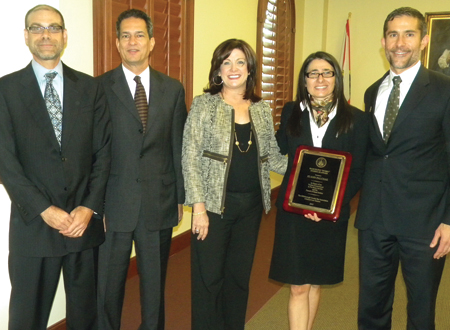 Jo Ann was awarded the "Bubba" Huerta Award in 2013 by the Criminal Law Section of the Hillsborough County Bar Association.  This award recognizes the  "tireless commitment to pro bono service and pursuit of equal justice" and it is awarded in honor of the late Marcelino "Bubba" Huerta, Esquire.  From left to right are Ms. Palchak's good friends and prior "Bubba" winners, Jim Felman, Eddie Suarez, Mrs. Huerta, and Michael Maddux.

Here is Palchak with the students at Lockhart Elementary Magnet School.  The Inns of Court of Tampa Bay sponsored the Justice Games and one of the events, organized by Palchak, was the Bankers Box Challenge.  Several boxes of school supplies were collected and donated to the Lockhart and Lee Elementary School.

The establishment of an attorney-client relationship with this Firm will only be by an express agreement memorialized in writing.